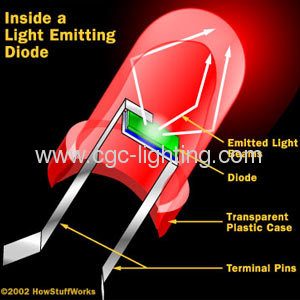 While all diodes release light, most don't do it very effectively. In an ordinary diode, the semiconductor material itself ends up absorbing a lot of the light
energy. LEDs are specially constructed to release a large number of photons outward. Additionally, they are housed in a plastic bulb that concentrates the light in a particular direction. As you can see in the diagram, most of the light from the diode bounces off the sides of the bulb, traveling on through the rounded end.
LEDs have several advantages over conventional incandescent lamps. For one thing, they don't have a filament that will burn out, so they last much longer. Additionally, their small plastic bulb makes them a lot more durable. They also fit more easily into modern electronic circuits.
But the main advantage is efficiency. In conventional incandescent bulbs, the light-production process involves generating a lot of heat (the filament must be warmed). This is completely wasted energy, unless you're using the lamp as a heater, because a huge portion of the available electricity isn't going toward producing visible light. LEDs generate very little heat, relatively speaking. A much higher percentage of the electrical power is going directly to generating light, which cuts down on the electricity demands considerably.
Per-watt, LEDs output more lumens of light than regular incandescent bulbs. Light emitting diodes have a higher luminous efficacy (how efficiently electricity is converted to visible light) than incandescents -- for example, Sewell's EvoLux LED bulb produces 76.9 lumens per watt compared to an incandescent bulb's 17 lm/W [source: Sewell]. And they last: LEDs can have lifetimes of 50,000 hours or more [source: Design Recycle Inc].
Up until recently, LEDs were too expensive to use for most lighting applications because they're built around advanced semiconductor material. The price of semiconductor devices has plummeted since the year 2000, however, making LEDs a more cost-effective lighting option for a wide range of situations. While they may be more expensive than incandescent lights up front, their lower cost in the long run can make them a better buy. Several companies have begun selling LED light bulbs designed to compete with incandescent and compact fluorescents that promise to deliver long lives of bright light and amazing energy efficiency.


Previous:   LED Light Bulbs vs. Incandesce Next:  What Are LED Lights Used For?