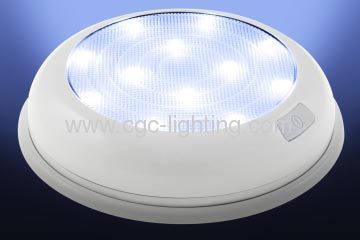 For decades, 100-watt incandescent light bulbs have lit up hallways and bedrooms; 60-watt incandescents have shone softer light from reading lamps and closets. But incandescent lights have some problems. They're inefficient, wasting lots of energy as heat, and have shorter lifespans than fluorescent lamps. Recently, compact fluorescent (CFL) bulbs have become popular alternatives to incandescent bulbs thanks to lower power consumption. Where incandescent lights last an average of around 1,000 hours, CFLs can last 8,000 hours. Unfortunately, CFLs contain toxic mercury that makes them potentially hazardous and a pain to dispose of [source: Design Recyle Inc].
Enter the LED light bulb. LEDs offer the advantages of CFLs -- lower power consumption and longer lifetimes -- without the downside of toxic mercury. For example, a 60-watt incandescent light bulb draws more than $300 worth of electricity per year and provides about 800 lumens of light; an equivalent compact fluorescent uses less than 15 watts and costs only about $75 of electricity per year. LED bulbs are even better, drawing less than 8 watts of power, costing about $30 per year, and lasting 50,000 hours or longer [source: Design Recyle Inc]. There are only 8,760 hours in a whole year -- imagine how long an LED bulb would last in the average home!
That makes LEDs sound pretty great -- and they are -- but there's a reason incandescent and compact fluorescent bulbs are still around. LED bulbs present a high up-front cost compared to other bulbs. Incandescent bulbs sell in packages for only a few bucks. As of mid-2011, Sewell's EvoLux LED bulbs sold for more than $70 apiece! However, because of their longer life spans and dramatically lower power usage, LED bulbs make up for the high barrier of entry. Since there's no toxic mercury in an LED, they're also easier and cheaper to dispose of than CFLs. And since LEDs can be built to light up in a variety of colors, they don't need filters like other bulbs.
LED lighting obviously isn't perfect yet. In addition to the high cost barrier, LEDs are vulnerable to high temperatures. If LED circuitry gets too hot, more current will pass through the junction mentioned earlier in this article. When too much current courses through the junction, it will cause irreversible burn-out often called LED meltdown [source: Fun-LED-Light].
LEDs and fluorescents put off "cool" or bluish light compared to the "warm," yellowish light typical of incandescent bulbs. The difference in lighting types can take some adjustment, but LEDs obviously offer numerous advantages over incandescents. LEDs are even easy to dim and are perfect for encouraging plant growth, since they efficiently put off tons of light without producing heat that could potentially be damaging to plant life.


Previous:   LED TVs and the Future of Ligh Next:  LED Advantages